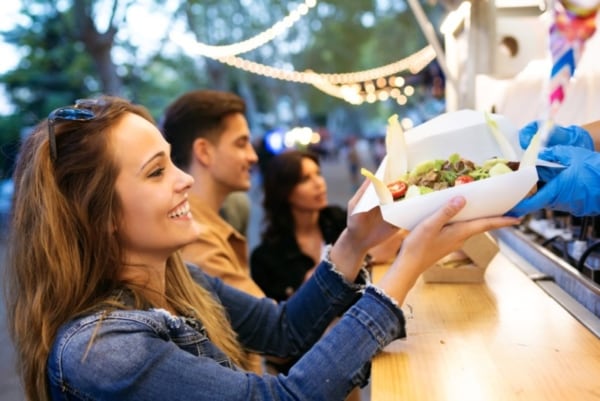 We’re in the heart of food truck season here in the Twin Cities as thousands of hungry Minnesotans eagerly hunt for some of the tastiest street food in the Midwest. Luckily for visiting travelers, Minnestay’s luxury vacation rentals are always a short drive or stroll from the best Minneapolis food trucks. Whether you’re in the mood for melt-in-your-mouth brisket or perfectly spicy Baja-style tacos, you’ll never leave the Twin Cities hungry.

Every month, thousands of people in the Twin Cities search for “food trucks near me” in hopes of locating a tasty, convenient meal in Downtown Minneapolis around lunchtime or at a nearby brewery. Unfortunately, there isn’t a food truck finder for such occasions. To assist your street food search, we’ve compiled five of our favorite Minneapolis food trucks that frequent our most popular neighborhoods.

Let’s start this list with a Downtown Minneapolis staple: TurboTaco. Not only is TurboTaco one of the premier Downtown Minneapolis food trucks, but they’re slinging perhaps the best tacos in the state. Choose between over a dozen Baja-style tacos, and let your tastebuds enjoy the spicy, flavorful ride. Their signature beer-battered, Panko-coated Icelandic cod with housemade slaw and sauce are simply to-die-for! Don’t forget to try a tray of tacos during the upcoming St Paul Food Truck Festival in Mears Park.

Run Tell That BBQ is tough to locate as their beef-smoking equipment impedes their ability to park anywhere, anytime. But, holy smokes, does their beef brisket rank among the best in North America (Kansas City included). We recommend sending them a message on Facebook to ask where they’re going to be located on a given weekend. The smoky brisket sandwich and nachos are both sensational options for BBQ lovers.

The TOT BOSS food truck has become legendary despite sticking to a simplistic approach to street food. Unlike most Minneapolis food trucks, TOT BOSS doesn’t serve “meals” but rather crowd-pleasing, sharable trays of Ore-Ida tater tots topped with just about anything under the sun. We’ve tried them all – you genuinely cannot go wrong with a healthy serving of their crispy tots. But we’re partial to the chili, poutine, and nacho tots!

Brava remains one of the most under-the-radar Minneapolis food trucks despite serving delicious, healthy, and inventive creations almost every day of the week. They make most of their “dough” along the streets of Downtown Minneapolis at lunchtime, but you’ll also spot them at local breweries such as Surly and North Loop’s Inbound. Their sweet-and-spicy Hawaiian tacos and pulled steak sandwich (on a pretzel bun) are among the yummiest treats in town.

Along the banks of the Mississippi River on the edge of Downtown St Paul rests a unique slice of the local food scene: City House, a quaint yet beautiful patio that serves signature cocktails, local craft ales, and a full lineup of food from Red River Kitchen’s resident food truck. Not only is City House a great place to watch boats drift along the mighty Mississippi and gaze across the river at Harriet Island, but you won’t find a better Mojo Cuban in St Paul. You can also find Red River Kitchen at The Lab, which rests on the border of Minneapolis and St Paul.

After savoring street food from a couple of the best food trucks in Minneapolis, retreat to your North Loop vacation rental for an exciting evening of craft beer, dancing, and live music. North Loop has quickly evolved into the best neighborhood in the Twin Cities, largely because it’s within walking distance of Target Field, Downtown Minneapolis nightlife, and countless restaurants, breweries, and shops. To learn more about Sable (Minnestay’s owner living experience), please visit us online. And don’t forget to mark your calendar for next year’s Uptown Minneapolis Food Truck Festival.